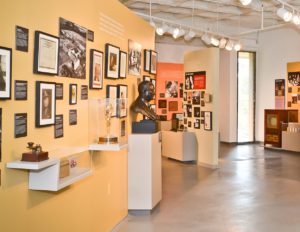 The Sarnoff Collection is named in honor of David Sarnoff, longtime chairman of the Radio Corporation of America (RCA) and internationally renowned pioneer in radio and television. The Collection comprises over 6,000 artifacts that document major developments in communication and electronics in the 20th century.

The Sarnoff Collection was originally established by RCA in 1967 as the David Sarnoff Library. Over the decades, the collection grew to include a museum, archives, and library. The museum collection, which comprises more than 6,000 artifacts related to the major developments in communication during the 20th century, was donated to The College of New Jersey in 2010. At the same time the library and archival holdings, which include Sarnoff’s papers and memorabilia; 25,000 photographs; and thousands of notebooks, reports, and publications related to the histories of RCA and the RCA Laboratories, were transferred to the Hagley Museum and Library in Wilmington, Delaware.

Dr. John Pollock, Communication Studies Professor at TCNJ, helped bring the collection to the college in 2010. The arrangement stemmed from a casual conversation with a Swarthmore College classmate — Rosita Sarnoff, the entrepreneur’s granddaughter. When she learned of Dr. Pollock’s position, she asked if the College might host the museum. According to Dr. Pollock, “I tried to wait a nanosecond (before responding yes).”

The interest soon became department wide, and a number of Communication Studies professors traveled to see the collection. Dr. Pollock decided to write 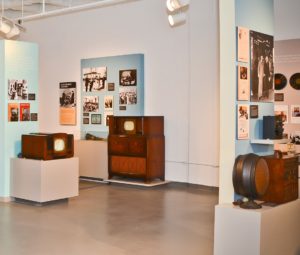 directly to Carol Bresnahan, Provost and then-Executive Vice President as well as then-Vice President for Advancement, John Marcy, about the proposal.

The Sarnoff family chose the College over other institutions, such as the Smithsonian and the Henry Form museum, Dr. Pollock said, largely because of the College’s capacity to show items year round, and to a wide range of visitors, including children. Bresnahan said a busy institution like the Smithsonian would not have had the space to show the collection intact and on a regular basis. 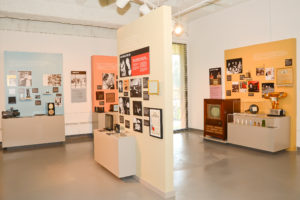 The research, cataloging, and imaging of the Sarnoff Collection is an ongoing project. The information in the collection database, available through this website,is continuously updated as new or expanded information becomes available. Visitors to this website are encouraged to submit comments in the box included with each object record and to share their knowledge about the collection.

To learn more about the collection, head over to the official David Sarnoff page.