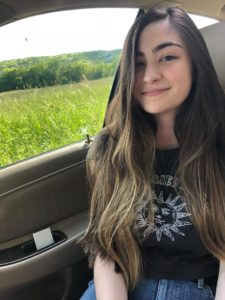 On-campus Involvement: Secretary for Student Film Union and a member of the Sustainability Club.

When and where did you intern: Creative Development Intern, DIGA Studios (Spring 2019)

What drew you to Communication Studies?

I have a strong passion for film and learning how to communicate effectively with others.

Describe your internship and your role.

I helped with the creative development of shows they were planning to shows that were in the works. Basically, they would tell me what the show was about, what they needed, and on a shared document, we would collaborate and figure out ideas for the show. I also did weekly coverage on new shows and reported back to them on whether or not it was worth the watch in my opinion. Occasionally, they had some scripts to read for new shows and we would give coverage on them too, which was a great experience. Every week or so we also had assignments. We had to pitch a show based on a game, based on a celebrity, etc. Then, they would give us feedback.

What is your best memory from your internship?

They were deep in the works of a new spin off show and they brought in the host to film test runs. It was such a cool experience to see how everything worked and what a fun environment it was.

What is one skill you improved upon while at your internship?

Knowing just how much went into creating a well thought out, feasible show is so important. I thought I had a great pitch and then after I pitched it, their feedback was instrumental in fine tuning it and making it a realistic show option that a network would want to take on. It was extremely helpful.

How did Communication Studies help prepare you for your internship?

My film classes taught me a lot that other employees might reference. Like if we learned about a famous film in class and a coworker mentioned it, I could add to it and just understand what they were saying. It made me feel like I was part of the conversation as opposed to an intern who still had a lot to learn.

Do you have any advice for students looking to apply for internships?

Talk to your professors. They can help connect you.